20 x 28, oil on canvas. "Gilbert Munger 1876" lower left. A frame plaque states, "The Colorado River -- Gilbert Munger." This painting is a near duplicate of the images in paintings #35 and #42. It was given by Frances Goll Mills in 1983 to the Saginaw Michigan Art Museum. The title was changed later by the museum. The reason for the title change is not documented.

This is the Munger painting of the same name and date that was in the Lyman A. Mills collection. Mills was the Lieutenant Governor of Connecticut from 1899 to 1901. He had at least 15 Mungers. A scrapbook keep by Munger's niece Myra Dowd Monroe [1872-1966] that was given to the Madison CT Historical Society contains a black and white photo of the painting with the hand written notation: "1876 'Colorado River' by Gilbert Munger. Sold at Christie's London (1908 or) 1909 sale. (Lyman A. Mills Collection.)" That painting was included in an exhibition of Mills paintings at the Morgan Memorial, Hartford CT, beginning November 12th, 1923. It very likely was passed down along the patriarchal line to Mrs. Mills: Lyman A. Mills 1841-1901 to Herbert Lee Mills 1868-1934 to Kendall A. Mills 1903-1968 who married Frances Goll Mills .

There are several paintings by Albert Bierstadt and John Ross Key with a "Merced River" title that very closely resemble the three Munger paintings. Gorden Hendricks in his book Albert Bierstadt -- Painter of the American West indicates that this Bierstadt title is incorrect. Munger is known for accurate landscapes and no view in Yosemite Valley has all these components. Image provided by the Saginaw Art Museum. 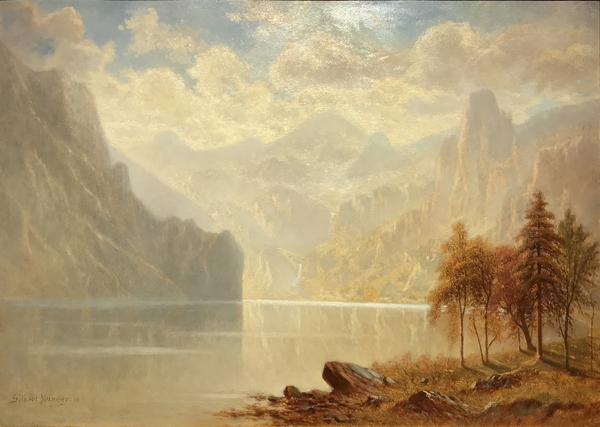