11.5 x 17, oil on panel. "Gilbert Munger" lower left. This painting depicts the same scene as #271 and #244. The title difference is not important, as Nanterre and Bougeval are very close to one another geographically. The back has a somewhat decomposed paper label stating: "106 -- Near Nanterre -- Gilbert Munger -- Paris 1889." A painting of this title and similar size was was sold at the auction of the collection of Charles T. Yerkes on 5 April 1910 at Mendelsohn Hall, New York City, where it fetched $425: the buyer is listed as T. R. Benkhard. The catalog describes the painting as follows:

Extending across the front is an expanse of still water with motionless reflections of a faint gray sky, mottled with puffs of mauve and cream. The smooth surface is interrupted by a dark punt that is being propelled by a man in a white shirt. Silhouetted against the waning light of the sky are the trees that border the opposite bank. A clump appears toward the right, separated from another in the center by the creamy walls and brown roofs of some cottages. Other buildings are visible toward the left, succeeded by a row of separate poplar trees. The vista is closed by a spit of land projecting from the left of the picture, where a white and dun cow are seen near a mass of soft yellow, green and brown willows. Signed at the lower left: "Gilbert Munger"

This description shows the width as one inch different and the incorrect medium from #287, but otherwise matches this painting exactly. #271, which has a label with 'No.4', and #244, which is the correct size, are also good candidates to match the description. 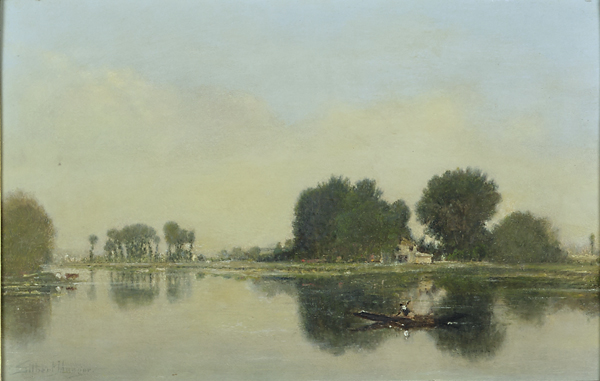