#308. Barbizon Trees in Winter.   20 x 25, oil on canvas, relined. "Gilbert Munger" lower left. Bought by a California collector in 2019 from a Virginia dealer. The dealer states that they acquired the painting locally. Sold at Bonhams Los Angeles California Art auction of 20 April 2021 for $16,000 + 27% to another California collector.

The painting is unusual. One might think it is unfinished, but it being signed dictates otherwise. Painting #34, dated 1888, and painting #17, dated 1901, are clearly the same two trees in a different season, with the odd transformation that the image is reversed horizontally. The 1888 date confirms that the scene is Barbizon, The 1901 version was painted after Munger moved back to Washington DC. Thus, this starker version likely also was painted in Munger's Washington DC studio around the turn of the century, which may explain why it was found in Virginia. The image here is quite striking and the painting would be at home in a more modern setting than most 19th C. landscapes. Conserved by Chelsea Restoration Associates, New York City, in 2019. Image from Bonhams photo. 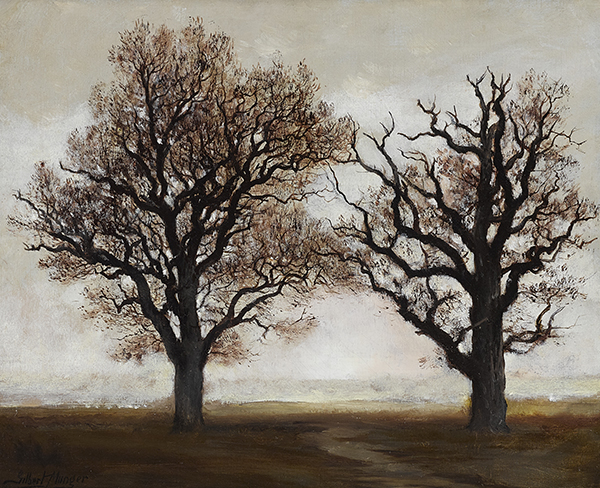