Blue waters of the Lagoon, with gondolas at the right, and square-rigged vessels moored near quays, before a view of the Doge's Palace and the high tower of the Campanile bordering the entrance to the Grand Canal, with the domes of the Salute at the left. (Mills estate)

A late 1990s conservation has uncovered an astronomical oddity in the painting. From John E. Bortle's The Bright Comet Chronicles we have:

COMET C/1882 R1 (GREAT SEPTEMBER COMET; O.S. 1882 II). Followed with the unaided eye from Sept. until mid-Feb. 1883; ... Brightest, most extraordinary comet in over 1,000 years. A member of the Kreutz sungazing group of comets. Spotted on the morning of September 1, and from the 7th or 8th was observed throughout the world in western Hydra with a second- to third-magnitude head and a short tail. ... On September 17, at perihelion, easily visible to the unaided eye at noon, less than 1 degree from the sun, magnitude perhaps -17, with a tail up to 3 degrees long!. ...

Munger, who we know to have been in Venice in September of 1882 (see letter printed on 1882 October 22 in the Archives) and who most often recorded what he observed, placed the comet in the sky of this painting. It is the left-pointing faint white 'V' in the upper right sky. The image is from the current owner's digital photo. 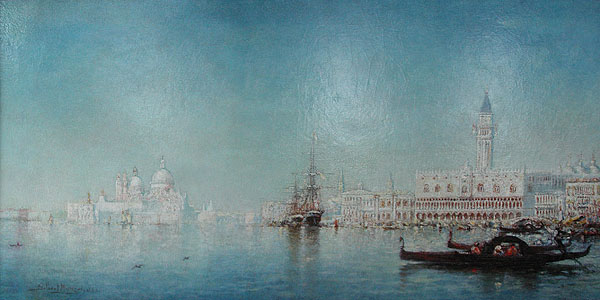