#160. Cazenovia Wheat (Corn) Field.   30 x 45, oil on canvas. "Gilbert Munger" lower left but hard to see. This is a slightly less abstracted view of the field than the depiction in painting #15. Concerning the parenthetical addition of "Corn" to the title, an agricultural expert has written the following to me:

I would say corn, or rather maize.  Wheat was called corn in the past, so maize is less ambiguous.  I think maize because of the stubble which has thick stumps planted in hills.  The shocks do look more like wheat, but wheat is harvested in summer when corn is still flowering.  The trees appear to be turning color, which suggests fall. And yes that is a basket of maize ears. Also, notice the people having their picnic amongst the shocks. The shocks are too tall for wheat.

Munger visited his artist friend Dwight Williams in Cazenovia NY for three months in the fall of 1900. This picture comes from that trip or just after, since Gilbert Munger died in January 1903. Roger Munger, his brother, emptied the studio and brought the pictures back to Duluth MN where this one has descended for four generations through his heirs until it was sold the Madison Historical Society, Madison CT, in 2020. (Munger was born near Madison.) QFD Pl.69. Tweed 2003 Exhibition n.66. Image from Tweed Museum, Univ. of Minnesota Duluth, transparency. 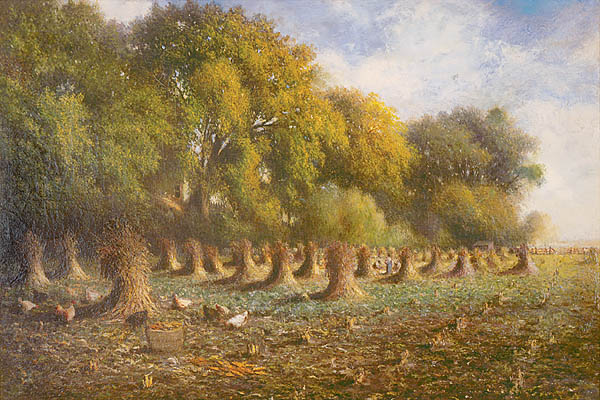