This painting was bought along with #312 and #314 by a Minnesota collector at the November 2013 estate sale of Daniel Mann of Rushford MN run by Darr Auctions of Rushford. See the latter painting for a discussion of the possibly related provenances. The stretcher is not original. The signature may have been lost when the painting was cut down. The painting shows Seal Rocks on the Pacific Coast of San Francisco, just south of the Golden Gate. The photo at the right of Seal Rocks was taken from exactly the same spot where Munger was painting. Munger made three trips to San Francisco between 1869 and 1875. Snow & Roos were in San Francisco in the 1860s and 1870s, and Munger used their supplies and sold through their gallery. He painted many scenes along this coast. A local paper noted on 25 November 1869, for example: "Munger exhibits two sketches of familiar shore scenes near the Golden Gate." This information together with the style of the painting makes a plausible case that it is by Gilbert Munger. Image from owner's email. 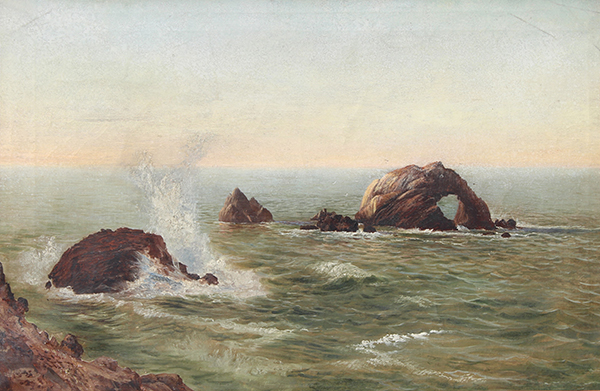