30 x 24, oil on canvas. No signature. An art materials supplier stamp for "Charles Roberson & Co, 99 Long Acre, London" is on the back of the canvas. This painting was bought along with #312 and #313 by a Minnesota collector at the November 2013 sale of the estate of Daniel Mann of Rushford MN that was run by Darr Auctions of Rushford. A friend of Mr. Mann believes that the Manns had purchased all three paintings from the same antiques dealer or sale. The stretcher is not original.

A typed card attached to the back says: "Minnehaha Falls Painted in the early 1890's by a friend of Paris Davis - son of LOUIS V. Davis, LaMoille." Karen E. Cooper, an historian who specializes in the human culture associated with Minnehaha Falls, has spent some time looking for a connection of Paris Davis to Gilbert Munger. She reports as follows:

Louis V. Davis was a son of Congressman Timothy Davis. This prosperous family had flour mills near LaMoille MN and in Elkader IA. Louis' son Paris Louis Davis was born in IA in 1867. Paris moved to St. Paul MN in 1883 and lived there until 1895. He roomed at 107 E. 3d, the address of the R. C. Munger music store, owned by Gilbert's brother Russell. Gilbert Munger returned from Europe and was visiting his family in St. Paul in 1893. Paris and Gilbert must have met. Since Gilbert’s middle name was Davis, I also examined the question of whether the Munger and Davis families could be related. As far as I can tell, they were not.

She also says that, after looking at photographs of dozens of paintings of the falls, this painting along with the other know Munger Minnehaha Falls paintings, #18, #154, and #191, likely are from the same artist, and they are distinct from any of the others she has seen.

When Munger arrived back St. Paul MN in 1893 he was reported to have brought a lot of paintings with him from Europe, some unfinished. As he had made good money reprising American scenes for his European customers, it is not surprising that a Minnehaha Falls with a London materials supplier stamp would be be included. It seems likely that Gilbert Munger was Paris Davis' artist friend. Image from the Minnesota owner's email. 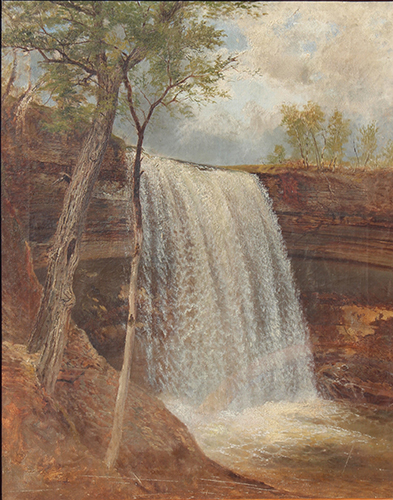