19 x 34.5, oil on canvas. "Gilbert Munger 1867" lower left; "Gilbert Munger, Mt. Shaster, 1867" reverse. The painting shows the southeast face of the mountain in morning light from a place about 8 miles northeast of McCloud CA. (Thanks to William C. Miesse of Mount Shasta City CA for doing the leg work.)

The title on the back is curiously misspelled. The date on the front and back is before Munger's first known trip to California in 1869 and before his first known visit to Shasta in 1870. Clarance King's book Mountaineering in the Sierra Nevada [1872, p. 248] mentions Munger painting from almost this exact spot in mid September 1870. See the 1870 November 22 article describing a new Munger Shasta canvas that matches this painting well, even noting the unusual morning light. The signature, date, and inscription are in Munger's hand. They likely were applied well after the painting was completed and remembered incorrectly. Painting #2 also has an incorrect and misspelled inscription in the same hand. 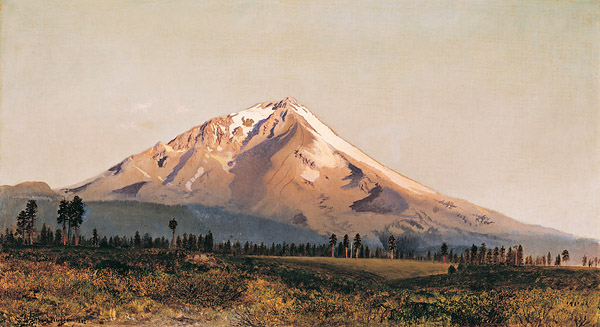